The Jews of Antigua and Barbuda

There is not a lot to the Jewish history of Antigua and Barbuda. The first Jews to live there were probably some Sephardic families who had arrived in the late 17th century through the early part of the 18th century. 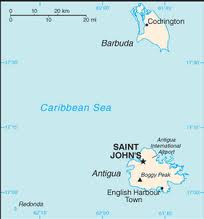 The numbers of Jews who lived there during these early times was probably very small, most likely well under a hundred, in fact most were Jewish merchants or traders, who travelled between Antigua and other Islands, such as Nevis. A good example of these travelling Jews can be found in the Knowles Collection-Jews of South America and the Caribbean. Abraham Abudiente (also known as Gideon) and his wife Bathesheba, are both buried in the Jewish Cemetery in Nevis, however they and other members of the family lived at times in Antigua. Many of the Jews who had lived in and travelled to Antigua left in the late 1600's. This was because laws were passed in 1694, that prevented Jew's from being traders in commodities and from being participants in the slave trade. Even though the law was quickly repealed in 1701, most Jews left and became some of those that settled in the early communities of North America.
Since so many of the early communities in the United States were founded by Jews from Antigua and other areas of the Caribbean it is very important to add Antigua and Barbuda to the list of Caribbean Islands that should be searched for ancestral ties for those American families.

Email ThisBlogThis!Share to TwitterShare to FacebookShare to Pinterest
Labels: Antigua and Barbuda, Nevis