WE MUST NEVER FORGET

The Early Jews of Rhode Island 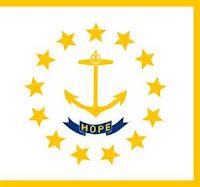 The Jewish history of Rhode Island is perhaps the earliest in all of North America. In Newport, the first members of the Jewish community started to arrive in the mid 1650's, over 100 years before the American Revolution. The first synagogue, known as Touro Synagogue was completed in 1763, and is still in use today, making it the oldest existing synagogue in North America.   The Hebrew Cemetery was open about a dozen years later in the mid 1670's. That makes it the oldest existing Jewish cemetery in America.

These early Jews were Sephardic, whose journey to Newport started in places such as Spain and Portugal, and like many of the early Jews in America, included stops in the Islands of the Caribbean. These earliest families in Newport, who had names such as Lopez, Rivera, Levy, Seixas and Touro, would one day be known as people who were very influential in the forming of early colonial history.
A few of these early leaders, included:
Today, the community has over 350 years of history behind it and continues to be a strong Jewish community. The Jewish population of Rhode Island today is almost 20,000 people. FamilySearch has quite a few databases that include the records of the Jews of Rhode Island.

As with all FamilySearch databases, these records can be viewed free of charge at anytime.

The Jews of Azerbaijan

The Jewish history of Azerbaijan is one that is old and very interesting. Located on the Caspian Sea, the country is surrounded by Armenia, Georgia, Iran and Russia.  The first Jews came to the area over 1500 years ago when the Mountain Jews arrived.
The Mountain Jews, who are also known as the Persian Jews first arrived sometime before the 5th century. The Mountain Jews have a history well over 2000 years old.
According to their own tradition, the Mountain Jews believe they are descended from the Lost Tribes who left what is now Israel after the destruction of the First Temple. After leaving Israel they made their way through Syria and Babylon before arriving in Persia. Finally their ancestors came to live in southern Azerbaijan, which is now the northern part of Iran.

While living in southern Azerbaijan the Jews adopted Tat, which was the language of the native Muslim people. They adopted the language but remained Jewish. Their language over time has evolved into a very distinct dialect, Juhuri, which incorporates many parts of the ancient Hebrew language.
The first Ashkenazic Jews started arriving in Azerbaijan in the 1800's. It was at this time that the Czar of Russia first sent Ashkenazic Jews into the area. Another wave of Ashkenazim came during World War II in an attempt to escape the Nazis.
Today, most of the more than 15,000 Jews of Azerbaijan live in cities such as Baku, which is home to the majority of the community, and Quba and Grozny.
The overall population of the Jewish community has shrunk from where it was as recently as the 1990's. At that time there were more than 75,000 Jews. The decline in population can probably be blamed on economic conditions, and not anti-semitism which has for the most part not been a problem to the Jews. Yes, while the Soviet Union was in control they did seize many buildings and property, however the leaders today have returned many of those buildings, including the synagogues back to the people.
The fact that many of the Jews have no immigrated to Russia, Israel and the United States is because they are seeking employment or because the young people are looking for a place to get a better education.
Posted by W. Todd Knowles at 12:17 PM 6 comments: 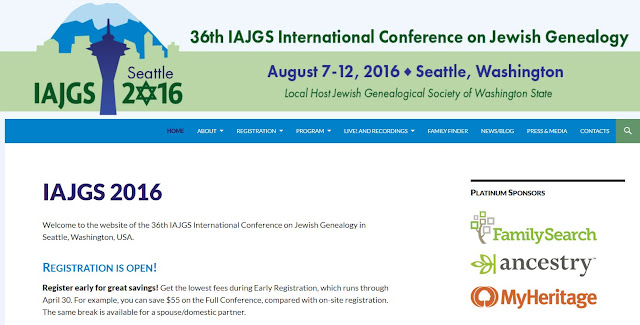 It's official, registration for the 2016 International Conference on Jewish Genealogy is now open. Even though the conference is still seven months off, time will fly as the conference approaches. For more information on Early Registration discounts visit the www.iajgs2016.org website. I look forward to seeing everyone in Seattle.
Posted by W. Todd Knowles at 8:49 PM No comments: