On 1 June 1875, the State of New York conducted a census of its residents. The records from that census are now being added to FamilySearch. That collection now has over 720,000 images available to be viewed. While there are some counties that are not included it is certainly a nice addition to the website.
The collection can be searched by name, and the results provide a good deal of information. Below, is the household of Jonas and Salina Cohen, and their eight children, who lived in Troy,  Rensselaer, New York. 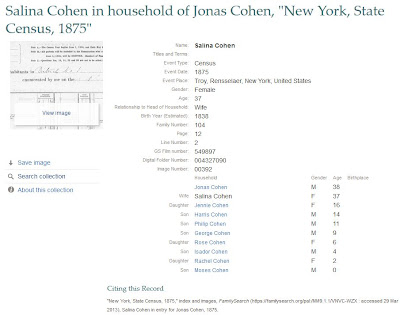 By clicking on the view image tab, the original record can be viewed. The original document also shows us that two other families lived in the same home. 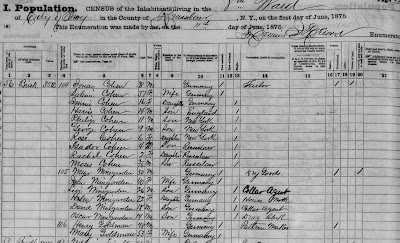 In a previous post at this blog, the records of the Balch Institute for Ethnic Studies were discussed. Now, FamilySearch has added an immigration collection created by the Balch Institute to its collections. That collection, the Russians to America Index, 1834-1897, is now available in the Historical Records Collections in the United States section.

While there are no images, the collection can be searched by name. As of this posting, the collection contains over 525,000 records. The record below, shows the incredible amount of important information each record provides. 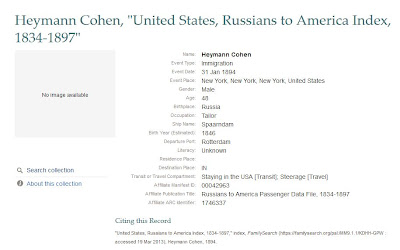 For those trying to locate their Russian families, this database should be an important research tool.
Posted by W. Todd Knowles at 12:09 PM No comments:

The Jewish history of the area now known as Bratislava dates back well over 700 years ago. Now the capital city of Slovakia, it was until 1918 in Hungary. Known in Hungary as Pozsony, it was the home of the Kings of Hungary.
The Jewish community of Bratislava is first acknowledged in 1291, when they were granted a charter by King Andrew III. The members of the community, comprised mostly of merchants, bankers and owners of vineyards became taxpayers and established a solid community. The earliest synagogue was built in the 1330's.
Life in Bratislava was not always peaceful for the Jews living there. In 1360, the Jews were expelled from Hungary, and some residents fled to Austria. They were allowed back in 1367 and were even allowed to return to their homes. However in 1371, laws were put in place that regulated financial transactions between Jews and Christians. In 1392, Christians were exempted for a year from having to pay taxes on money owed to Jews. Later, in the mid 1400's, on two different occasions, all debts owed to Jews were cancelled. 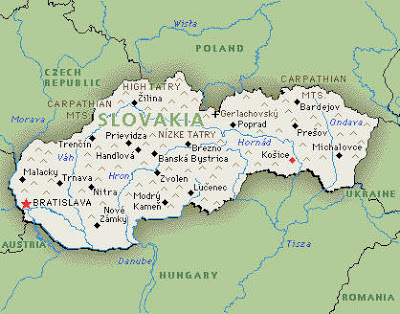 Over the next 300 or so years, the Jews suffered through multiple restrictions on the community. The restrictions included who they could trade with and where they could live. Also, on numerous occasions they were expelled from Hungary. Because of these actions the Jewish population was under 200 hundred by the early 1700's.
In the early 1700's, Jews in the various areas of Bratislava were given some protection and were even allowed to establish small communities. In the 1770's the Jews living in the area of Schlossberg were permitted to settle on land owned by the city and establish their own "Jewish Street". The Jews of Bratislava became very well established. They established the textile trade in Hungary and helped Bratislava become a center of learning for Jews, in fact, for Orthodox Jews it became a major place of importance for the entire world. By 1930, the Jewish population of Bratislava had grown to almost 15,000 which was well over 10% of the entire population.
Now, Marelynn Zipser has transcribed the records of the Jewish community of Bratislava, and made those available to the Knowles Collection. This incredible work is now part of the Jews of Europe database. The collection can be search at the FamilySearch Community Trees site. That link is provided at the top right of this blog. A very special thanks to Marelynn for all her hard work. She is truly blessing so many with her efforts.

The Knowles Collection: Jews of Europe database has been updated again. The continued growth has brought the database to now include the records of over 250,000 Jews. The latest additions  include the birth, marriage and death records of the Jews of Bratislava, as well as records from Denmark and the Netherlands.
Posted by W. Todd Knowles at 7:51 AM 2 comments:

It seems that in the last few weeks FamilySearch has added a lot of very good death records to the Historical Collections page. Last week on this blog we showed the death records for India and the Netherlands, and today we have the records from the state of Delaware.
The collection, Delaware, Death Records, 1855-1961, is a collection that is search able by name, and as of today includes over 420,000 records.

The search in the index provides the basic information (shown below) 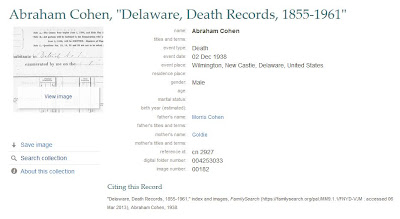 By clicking on the view image link, the original record can be viewed. The record below shows the death certificate for Abraham Cohen. 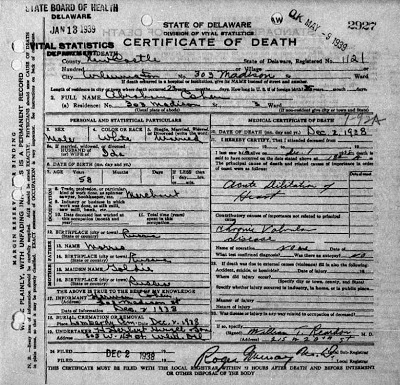 This source will be a great tool for those with ancestors in Delaware.
Posted by W. Todd Knowles at 11:15 AM No comments:

Another great collections of deaths and burials that has now been added to the Historical Collections at www.familysearch.org are those from India. Over 566,000 records for the 1719-1948 time period have been added. The collection is name search able and can be found at the following link; India Deaths and Burials, 1719-1948. 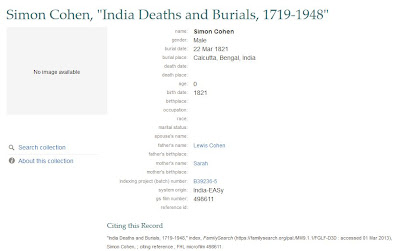 The image above, the death of Simon Cohen is a good example of the information that is provided. As always the collection can be searched for free from the comfort of your own home.
Posted by W. Todd Knowles at 10:27 AM No comments:

Some of the Deaths and Burials for the Netherlands have now been added to the Historical Collections at www.familysearch.org.  The collection, which is name search able, includes over 200,000 records for the period of 1668-1945.

The information provided in the record can be very helpful in locating your family members. The original source film numbers are also included. Below is the death of Sara Levi. 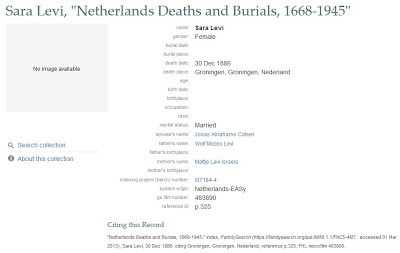 The entire collection can be found at the following link  Netherlands Deaths and Burials 1668-1945.
Posted by W. Todd Knowles at 10:04 AM No comments: