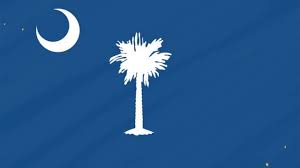 Charleston, South Carolina is one of the oldest Jewish communities in North America, dating to the very late 1600's. The early members of the Jewish community were the Sephardic Jews from London and the Netherlands who had made those cities home since being driven out during the expulsion from Spain and Portugal in 1492.
By the mid-1700's, Charleston was the destination of choice for the Jews leaving London. These Sephardic Jews were for the most part the families of wealthy merchant families. Once in Charleston they used their experience in business as they established their own holdings in Charleston. In the year 1800, so many Jews had made their homes in Charleston that it had the largest Jewish population of any state in the United States.
FamilySearch has been adding many records to its Historical Collections section that will be of help to researchers looking for their Jewish roots in Charleston. The list as of 17 December 2019 is shown below. 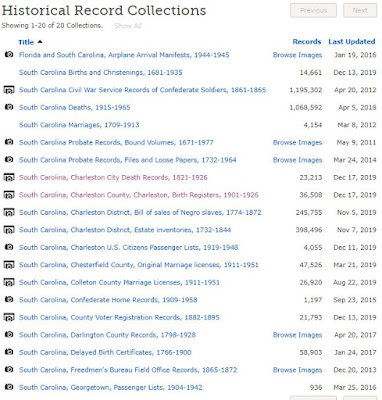 These records are constantly updated and should be checked often as the databases continue to grow.
Posted by W. Todd Knowles at 12:42 PM 1 comment: Links to this post

The very successful 2019 IAJGS conference is but a few weeks old and yet its time to begin planning for 2020.

From 9-14 August 2020 the IAJGS conference will return to the west coast, and be held in one of my favorite cities, San Diego, California.

For information will be coming soon and I look forward to seeing everyone there.
Posted by W. Todd Knowles at 10:08 AM No comments: Links to this post 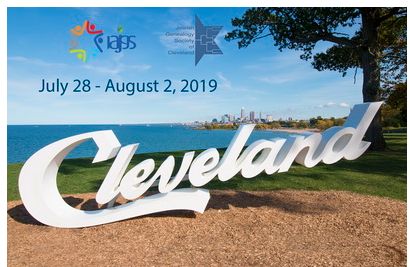 Only 3 weeks till we gather in Cleveland, Ohio for the 39th annual conference of the International Association of Jewish Genealogical Societies (IAJGS). I'm looking forward to seeing a lot of old friends and meeting many new ones. I hope to see you there.
Posted by W. Todd Knowles at 9:19 AM No comments: Links to this post

On 28 April 2019 I am honored to be speaking at the Center for Jewish History in New York City. My topic will be Using FamilySearch.org for Jewish Research. I look forward to seeing everyone. 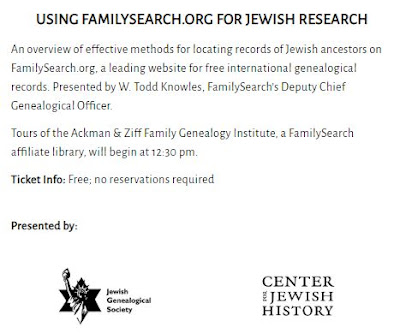 Posted by W. Todd Knowles at 11:33 AM No comments: Links to this post

Another great set of marriage records has been updated at FamilySearch.org. This collection, Oklahoma, County Marriages, 1890-1995, contains marriage licenses and certificates from various counties in Oklahoma. It is not a complete collection, but as of now has almost 50% of the records of the state for the time period. The current 345,859 images will be added to as new records are received.
The records themselves are very easy to use and very helpful for researchers as they try to locate family. The record below is for Sam Carshon, who married Sadye Cohen on 7 June 1914 at Pottawatomie, Oklahoma. He was 29 and she was 27. 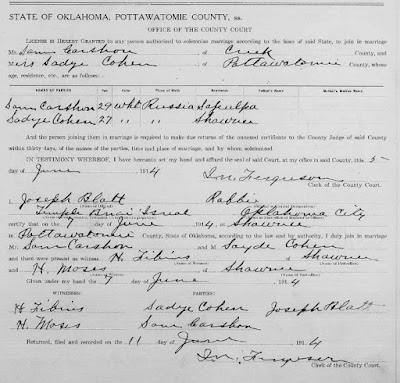 For those with ancestry in the State of Maine, a newly updated database at FamilySearch should be of great interest. That database, Maine, Tombstone Inscriptions, Surname Index, 1620-2014 is a collection of extracts taken from headstones in various cemeteries located from all parts of the state of Maine. The digital images of the original cards are in the possession of the Maine State Library in Augusta.
The record below is for Samuel A. Cohen, who was born in 1904 and died in 1960. It states he was buried at Beth Jacob in Auburn, Androscoggin, Maine. According to the record his wife, Betty N., who was born in 1909 and died in 1958 is also buried there.


An interesting item about this database is that married women are usually listed twice, once under their married name and once under their maiden name, which is a great benefit to researchers. This record calls the cemetery Beth Jacob, however a search of the Find A Grave website (www.findagrave.com) shows both of them buried at the Temple Shalom Synagogue cemetery, also located in Auburn.

This may appear confusing but can be easily explained. In 1982, Congregation Beth Jacob and the Lewiston Jewish Community Center merged to become the Temple Shalom Synagogue.
Posted by W. Todd Knowles at 12:03 PM No comments: Links to this post