Adolph Sutro 24th Mayor of San Francisco and his family.

Adolph Heinrich Joseph Sutro (29 Apr 1830- 8 Aug 1898), was born in Aachen, Prussia the son of Emanuel and Rosa (Warendorff) Sutro. He was an educated man, with a background of engineering when he arrived in the United States in 1850.

Sutro had plans to drain water and gasses from the mine shafts of "The Comstock Lode" by building a tunnel through Mount Davidson to drain the water. He incorporated the project and over time made considerable money from the project. When he saw that modern technology would soon be able to out dig his equipment he sold out and moved to San Francisco.
Sutro invested his fortune in many projects in the San Francisco area, many of them remain today, and bear his name. His popularity led him to be asked to run for mayor. He won and served as the 24th mayor of San Fransisco from January of 1895 to January of 1897.
In the collection of records left by Malcolm Stern at United Hebrew College is a descendency chart of the Sutro family beginning with Abraham Sutro (grandfather of Adolph) and continuing down through almost 700 members of the family.
The records of that chart have now been added to The Knowles Collection- Jews of the Americas and will be available after the next update.
Posted by W. Todd Knowles at 2:01 PM No comments:

The history of the Jews of Cape Verde is a most interesting story. Located off the western coast of Africa, the Republic of Cape Verde is a group of ten islands which gained their Independence from Portugal in 1975. As a result of the almost 500 years of Portuguese rule, today there are virtually no Jews, the country is mostly all Catholic, but that was not always the case.
From the time of the Spanish Inquisition up until the late 1800's Cape Verde became a safe haven for Jews who were fleeing either religious persecution or simply wanted the opportunity to have stability in their personal and economic life.

The first Jews to arrive in Cape Verde, those from Gibraltar, landed on the island of Sao Tiago. Those Jews were then forced to live in the Ghetto in the capital city of Praia. Even though they were forced into the ghettos, they did maintain some rights, and in fact became very influential traders and businessmen. They were allowed to trade as long as they didn't compete with any of the established Portuguese trading companies. By the middle of the 1500's the Portuguese government had begun using the island of Santo Antao has a place to send convicts, most of these being Jews. In 1672, the inquisition made its way to Cape Verde, which caused the Jewish traders to have their merchandise seized. This caused many of the Jews to hide their true identities.In the late 1700's the Inquisition had subsided to the point that many families were able to reclaim their Jewish heritage openly. Later in the late 1800's Jews began arriving in Cape Verde from places such as Morocco. These Moroccan Jews, like those of hundreds of years earlier were fleeing persecution and trying to establish their businesses. The majority of the Jews from Morocco traded in hides and pelts and some in the coal industry. They established their homes on the islands of Santiago, San Vincent and Santo Antao.

Today, one would find it difficult to find any resemblance of a Jewish community on Cape Verde, most immigrated to Israel or other locations long ago. There are however Jewish Cemeteries on some of the islands. One group of descendants of the Jews who once lived in Cape Verde have formed a nonprofit organization with the hope of keeping the memory of the Sephardic families of Cape Verde alive.

That organization, The Cape Verde Jewish Heritage Project. Inc (http://capeverdejewishheritage.org/about-2/), hopes to restore the cemeteries, and document with research the lives of those who immigrated to Cape Verde from Morocco and Gibraltar.

Please visit their website, the work to preserve the histories of those who have gone before must continue.

This year we are remembering the 150Th anniversary of the beginning of the American Civil War. While most everyone from school age on up can retell something about that event, not everyone is aware of the many Jews who played important roles on both sides. People such as Judah P. Benjamin, who was perhaps the highest ranking Jew in the Confederate Army and a man many considered to be the brains of the Confederacy. He sacrificed so much for his adopted country, before dying in Europe after the War.
So many have fought so hard for this country. Through their efforts, we enjoy peace and the freedom to live our life as we so desire, we owe them so much. Their sacrifices should never be forgotten, and thanks to The National Museum of American Jewish Military History they never will be. 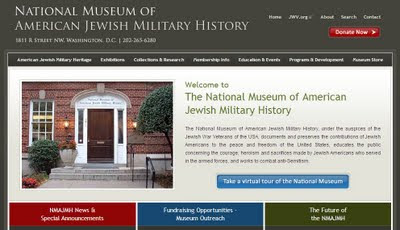 The Museum, based in Washington D.C. provides a great source for educating ourselves about those who have served and died in the service of others. The museum has a wonderful website (www.nmajmh.org) which is easy to use and should be visit by all. It pays tribute to all who have served in the military, and serves as a reminder to us all of what we are so blessed to have. May they never be forgotten.

Thanks to Alexandra Goldberg for bringing this to my attention.

This past week a gentleman submitted the records of his family to the Knowles Collection. What makes these records unique is that they are of a family whose roots are from Afghanistan, which would make it the first records from that country to be included in the database. Even though the family has not lived in Afghanistan since the early 1950's, when those that were still there immigrated to Israel it has made me learn so much more about the history of the Jewish community there.

The history of the Jewish people in Afghanistan dates back well over two thousand years. Various sources cite different dates for when the Jews arrived, however some believe it may date back to the time of the destruction of King Solomon's Temple. Regardless if it truly goes back that far, there seems to be no debate that the country has a rich and long history.

Places such as Khorasan and Ghazni have great historical importance to the Jewish people. What many historians seem to agree on is that in the 7th and 8th centuries the Persian Jews fled the Muslims after rejecting Islam and made there way to Afghanistan. In the late 11th century there were even some who claimed a community of over 40,000 Jews living in the city of Ghanzi.
Then in 1222 that community and many others were invaded by Genghis Kahn and his Mongol army. This invasion led to a large number of Jews in Afghanistan being lost as his army razed the cities. This event led to a time of isolation, where not much about the Jews is documented. This isolation would last hundreds of years, until the early 19th century.
In 1839, the Muslims began the forcible conversation of the Persian Jews, which in turn led to thousands of them making there way to Afghanistan and settling there. In the 1870's the Muslim leaders in Afghanistan enacted laws that were very anti-Jewish, causing thousands to flee to places such as Persia and Palestine. Later anti-Jewish campaigns led to the majority of those remained leaving, so that by the time the State of Israel was formed in 1948, probably less than 5,000 Jews remained. Between then and 1951, laws were in place that prevented those that remained from leaving, but when the restrictions were lifted, most that reamined left. By 1970, less than 300 Jews remained.
What the future holds for Afghanistan remains to be seen, however as changes occur maybe some of those families that left will be able to reestablish their family homes.
Posted by W. Todd Knowles at 5:47 PM No comments:

It has been discussed many times of the amazing databases becoming available at www.familysearch.org, that make it easier for researchers to find records of our Jewish ancestors in Non-Jewish records. A few more of those databases are now available free of charge for those wishing to locate their families in British Columbia, Canada. 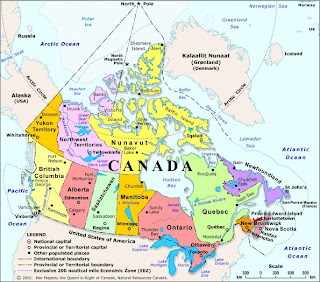 The databases are easy to find and very user friendly when it comes to searching the records. On the website is located the map of the world next to the links for browsing the databases of different parts of the world.

By clicking on the link for USA, Canada and Mexico, a listing of all the databases for those areas will be listed. Included in that list are three databases for British Columbia, Canada.

The two larger databases, Death Registration 1872-1986 and Marriage Registrations 1859- 1932 have a good number of records of the Jews of British Columbia. The databases are search able and while the images are not included the information provided is very good. The records below show some of the information for each record. 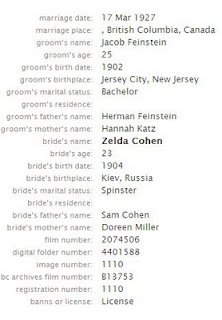 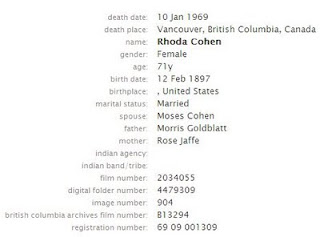 The records shown here, a marriage on the left and a death on the right, also provide the microfilm numbers of the original films in the collection of the Family History Library and also the film numbers from the British Columbia Archives.

Using those film numbers researchers should be able to find the original certificate if they so desire. Happy Canada Day Everyone