Every now and then there is a website which has the kind of incredible information that researchers just can't get enough of. Cemetery Scribes is one of those. Even though the site is not new, the name is. Formerly known as GenPals, the name has been changed. Cemetery Scribes has a large amount of information about Jewish records, including a wonderful database of burial records, some with pictures included. While it would be enough to have access to the burial records, Cemetery Scribes goes way beyond that. In addition to the death records, researchers will find information and histories about cemeteries, or about the symbols and customs associated with burials.
Anyone interested in Jewish research will find this a very valuable resource.
Posted by W. Todd Knowles at 11:18 AM No comments:

J. Lyons Company and the Glucksteins.

Recently I was introduced to a family that I had no previous knowledge of, the family of Samuel Henry Gluckstein and his wife Hannah Jacobs. Samuel was like to so many others, the son of immigrants who moved to Spitalfields to work in cigar manufacturing. He was born in Prussia, 1 of 8 children, moving to England at the age of 20, he stayed in the home of his aunt Julia Joseph. He must have enjoyed the stay as he married her daughter, Hannah, on 25 May 1845. Samuel and Hannah had 12 children, two of whom died in infancy. In addition to finding the family in the records of The Great Synagogue, the family can be found in all of the traditional civil records, i.e. census, probate, civil registration, etc.

Samuel and his brother Henry started their own cigar making business at 35 Crown Street. They later moved the business to Leman Street in Aldgate. Disagreements over the business led to it being dissolved in the Chancery Court and the assets dividing. It was at this point that Samuel started another cigar manufacturing business that would soon establish the family name in english history. Samuel, with his two sons, Isidore and Montague and his son-in-law Barnet Salmon formed what would become the J. Lyons Company Limited.

These few short paragraphs are not meant to tell the family story, it would take volumes to do so. Instead, I hope to bring attention to a source, I for one have not used enough, corporate business records. While searching for more information on this family I discovered the J. Lyons Company Limited website http://www.kzwp.com/. The records found at this site are incredible, from a history of the company to a collection of obituaries of some of the prominent employees. I cant imagine that any search of this family would be complete without a complete search of these records.

The records of this family are ine The Jews of the British Isles.
Posted by W. Todd Knowles at 1:34 PM 1 comment:

The seventh day of May 1915 is a day many will never forget. On that day the RMS Lusitania, was hit and sunk by a German U-boat off the coast of Old Head of Kinsale, Ireland. Of the 1959 people on board, 1198 of them lost their lives. Many believe this single act was responsible for the United States entering World War 1.

For one family, this day means much more. It was the day that Ree Alice Corer lost the man she loved, her husband Edgar. We know very little of him, from his headstone at Willesden Cemetery in London we know he was 43 years of age. Both husband and wife are missing from any census records, which could mean that England was not home, just a final resting spot. 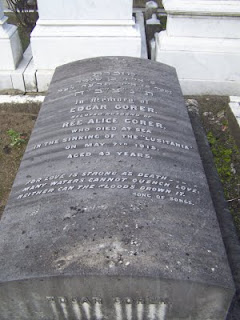 Knowing now how her husband died, makes the epitaph even more fitting. As a last thought to her beloved husband the following quote is left.

For love is strong as death---
Many Waters cannot quench Love:
Neither can the flood drown it.
Song of Songs

The records of this family are in The Jews of the British Isles.
Posted by W. Todd Knowles at 1:50 PM No comments:

For any database to be a helpfull tool for a genealogist, it must be easy to find. The "Knowles Collection" now has a couple of ways in which it can be accessed. The original location for the collection is on the Jewish Resources page at familysearch.org. At that site the collection can be downloaded as either a PAF file or as a Gedcom file.
The newest way to access the collection is by visiting the Historical Families website at histfam.familysearch.org/index.php. On this site the collection can be searched individually or together with the other pedigrees located there. As with familysearch.org, this a freely searchable website.
No matter how hard we try to avoid it, as the database continues to grow there will no doubt be errors or some duplication. While it is continually checked for errors, some are missed. That is why the input of the users is so vital. If errors are found, please contact me at this blog and we can make those changes. The email address is availble in the top part of the right hand column.
Posted by W. Todd Knowles at 12:45 PM No comments:

What is "The Knowles Collection"?

The Knowles Collection is a collection of records pertaining to the Jews of the British Isles. It is built upon the work of the late Isobel Mordy, of Middlesex, England. Her collection, which was put together for the most part before 1980 contained the records of about 7500 people in 160 family pedigrees. Considering that her work was done before the "computer age" and before the availability of many modern records, it was a wonderful source.

The Knowles Collection took that foundation and began using other records to fill in the gaps and link all the families into a fully search able electronic database. As of this post the collection covers the records of over 60000 individuals. While it is a collection of the Jews of the British Isles, there are Jews from over 30 different countries included. Mostly this has happened because at some point those people either moved to the British Isles or were visiting long enough to be included in the records.

The Knowles Collection is available free of charge to anyone searching for their Jewish ancestors. It can be found on the Jewish resources page at http://www.familysearch.org/. If you would like to have the records of your own family added simply email this blog for information.
Posted by W. Todd Knowles at 10:19 AM No comments: 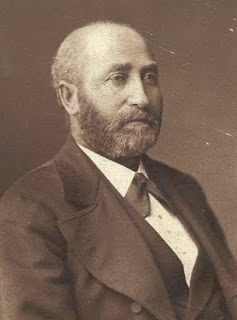 In January of 1976, the parents of a good friend, encouraged me to fill out a pedigree of my family. Little did I know, that what I did as a 13 year old would so greatly affect my life. I was instantly drawn to one ancestor in particular, my great-grandfather, Morris David Rosenbaum, a Polish Jew. The journey to find more about him and his life has not only become a time consuming hobby, it is also a most fulfilling part of my work.
Although Morris David Rosenbaum spent very little time in the British Isles, probably only enough time to gather himself before heading to the United States, learning more about the people he met and who may have ultimately had an influence upon his life has become a passion. From this search has come the Knowles Collection, a database of the records of the Jews of the British Isles.
It is my desire that through this blog the stories of the Jews of the British Isles can be told, and people from all parts of the globe will come together to keep the histories of our families alive.
This person is found in the Jews of the Americas.
Posted by W. Todd Knowles at 10:06 AM No comments: