The six databases that comprise the Knowles Collection continue to grow. Because of this, all of them were updated and the new records made available for people to search for free. The growth in the collection is coming from various sources, most notably cemetery records and family histories that are being donated. The Knowles Collection now has genealogical records for over 800,000 people. The databases and the number of people included is listed below.


The easiest way to search the collection is to visit the Community Trees section of FamilySearch.org. A link is provided at the top of the main page of this blog. That link will take you to the general search page for the databases posted there. That page is below. 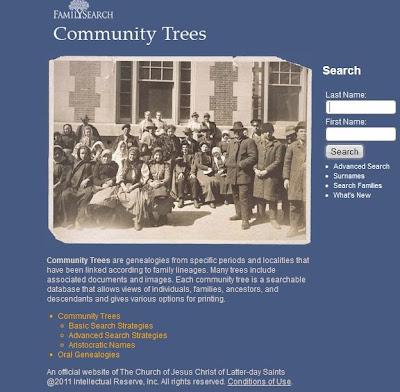 Searching this page will search everything posted, however if you simply want to search an individual collection, click on "Advanced Search". 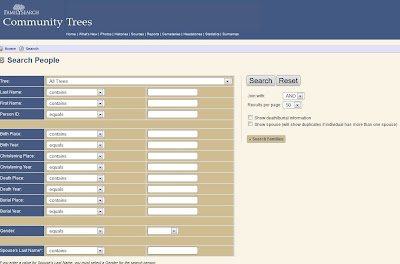 The drop down box will then allow you to select an individual database. 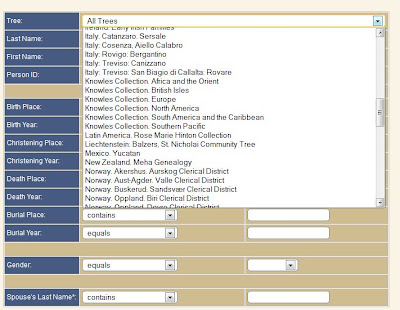 In the example below,  I have selected the British Isles tree and asked for all entries that have the surname Gluckstein. 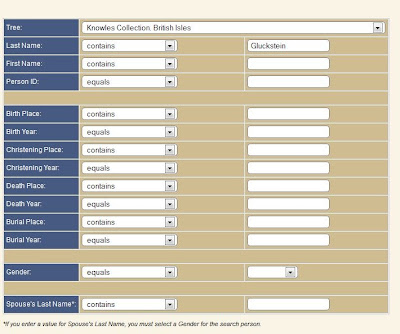 The results show 144 people with the surname Gluckstein in the British Isles. 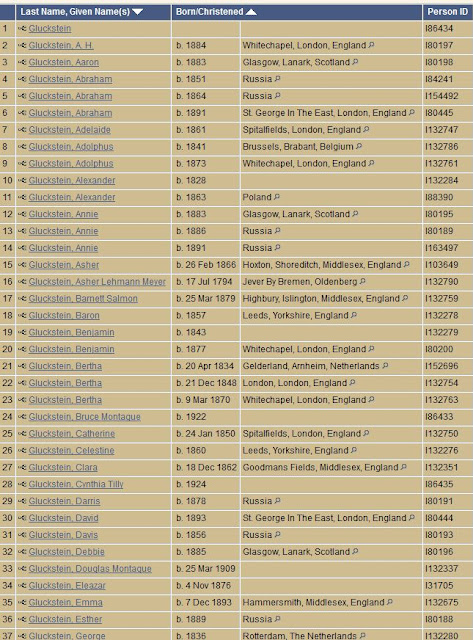 The record below is the results for Samuel Henry Gluckstein. The record also includes his parents, wife and children. 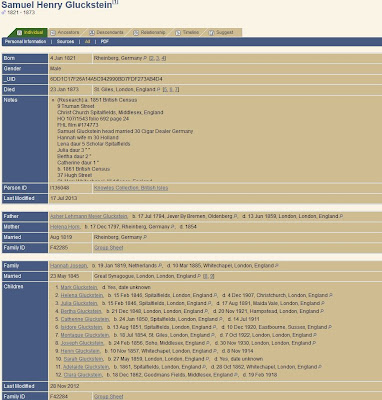 Thank you to all you have donated their own records or helped in anyway.
Posted by W. Todd Knowles at 10:36 AM No comments:

Emma Lazarus and the Statue of Liberty

On the 22nd of July in 1849, Emma Lazarus was born in New York City. She was the forth of seven children of Moses Lazarus and his wife Esther Nathan. Her family were descendants of Sephardic Jews from Portugal, who had been successful in the business of refining sugar.
From a very early age, Emma studied literature and became fluent in various languages, including German, French and Italian. She became well known as a poet, and later as a novelist and playwright. In the early 1880's, Emma began to advocate for the poor Jews who were arriving in New York. She was one of the founders who helped establish the Hebrew Technical Institute, which gave those Jews arriving from Europe the chance to learn a trade and become able to support themselves. She was also well known as calling for the creation of a Jewish homeland years before others. 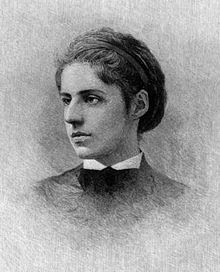 Emma was truly a remarkable woman in so many different ways, however it is for one poem that she most well known. In 1883, she wrote, The New Colossus. She wrote this piece and then donated it to an auction, that was raising money to build a pedestal for the Statue of Liberty.
After writing the poem, she traveled twice to Europe, and on her return from the second trip she fell ill and 2 months later, on 19 November 1887, she died. She was buried at Beth Olom Cemetery in Brooklyn, New York. Her early death not only took away a great Jewish woman, but also deprived her of the chance to see her poem be placed on the pedestal of the Statue of Liberty. It was placed there in 1903. That poem (below) has been seen by millions of people as they arrived looking to start a new life. Her work has given so many hope, when they had nothing else.

Not like the brazen giant of Greek fame,
With conquering limbs astride from land to land;
Here at our sea-washed, sunset gates shall stand
A mighty woman with a torch, whose flame
Is the imprisoned lightning, and her name
Mother of Exiles. From her beacon-hand
Glows world-wide welcome; her mild eyes command
The air-bridged harbor that twin cities frame.
"Keep ancient lands, your storied pomp!" cries she
With silent lips. "Give me your tired, your poor,
Your huddled masses yearning to breathe free,
The wretched refuse of your teeming shore.
Send these, the homeless, tempest-tossed to me,
I lift my lamp beside the golden door!"

Tomorrow, 4 July 2013, the Statue of Liberty is scheduled to reopen following repairs  for the damage caused by Hurricane Sandy. Her incredible words of hope will once again be an inspiration to all. May we never forget all that those new immigrants risked as they searched for a new home.

Many of us have been looking for years for those lost Jewish ancestors. What may have began with a simple search to find everyone with our own surname, soon becomes an obsession, controlling our time and wallets. It is why we are so fortunate to be living in a time when so many records containing the records of our families are becoming available on the Internet. A great example are the records of Spain. 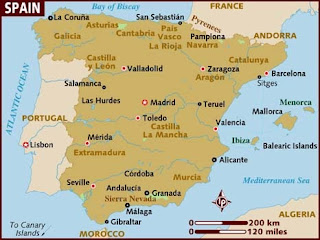 Over the last few months FamilySearch has been increasing their collection of the Municipal Records of the provinces of Spain. Millions of records have been added, some date to the middle of the thirteenth century. The list below shows the records as of July 1st. Those with the camera in front also have the images attached. 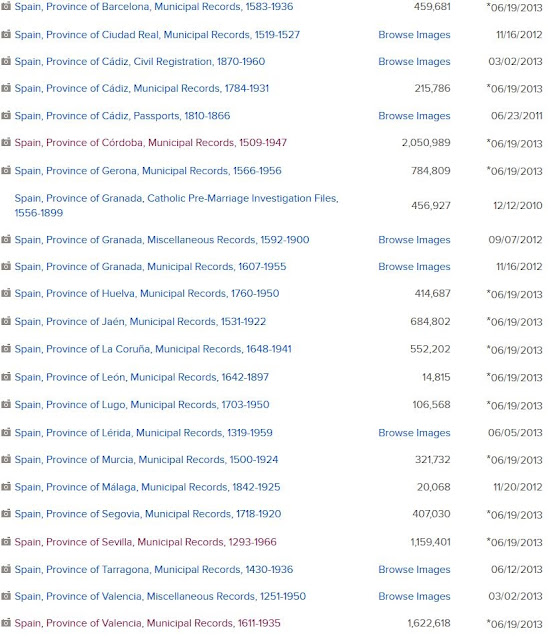 The records themselves can be quite helpful for the genealogist. They can include, Civil Registration, censuses, military records, and any other miscellaneous records. The collections will continue to grow as they are published. A great example of using these records to build family ties are the records from the Province of Córdoba.
A search of this database for the information for  Juda Cohen yields three records. The first is from the 1920 census of Córdoba. The record shows:

By clicking on the "View Image" tab, the original record can be viewed (below). It shows Juda Cohen and his wife Rafaela Caballero Prado living together with their 7 children.

The second record, the 1908 Census adds the name of Toledano to Juda's name (see below). It shows the family of he and his wife and their two oldest children.

The third record is actually a record for his wife. In the 1904 census (below), she is show as a single person.

Again, by clicking on the "view Image" icon we can see the original record. In it, Rafaela is shown as living with her mother, Antonia Prados Torres.

Interestingly, by going back to the 1908 Census, the next record, which appears at the top of the following page, shows Antonia Prados Torres, living next door.

These databases as well as those from the other countries of Europe can be found in the Continental Europe section of the Historical Record Collections, at Familysearch.org. As with many of the records at Familysearch, it is the incredible work of thousands of people indexing them, that makes it possible for all to use them. A big thanks to all who have helped. Happy hunting.
Posted by W. Todd Knowles at 2:46 PM 1 comment: