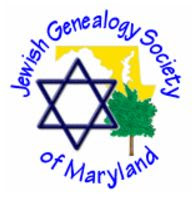 The Knowles Collection: What is it and How Do I Use It?

Looking forward to see you there.
Posted by W. Todd Knowles at 8:56 AM No comments:

In the past this blog has written about some of the collections available at FamilySearch.org for Britsh Columbia. The databases tend to provide a lot of very valuable information for those researching their own families. Now FamilySearch has updated the British Columbia Death Registrations, 1872-1986, 1992-1993 collection. This collection now contains almost one million records.

Included are many types of death registrations, including overseas casualties, delayed death registrations, and delayed registrations of Native American deaths.  Also within this collection are a large amount of registrations of deaths of members of the Jewish community. Although there are almost one million records, most images are covered by privacy laws and cannot be shown. Hopefully as time passes the images will be added.
In an attempt to see what information can be gained from this collection I did a search for Boris Cohen, who I know died in British Columbia. Boris was born in September 1928 in Arborg, Manitoba and died on 26 February 1985 in Vancouver, British Columbia. He was buried at the Schara Tzedeck Cemetery in New Westminster, Vancouver, British Columbia.
The death records found for Boris Cohen did not disappoint. Below, is the record from this collection. 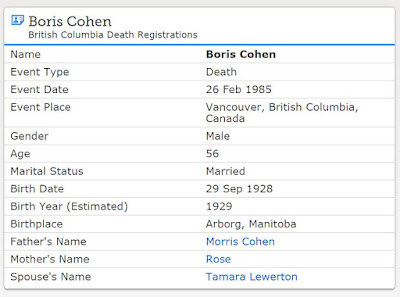 Thanks to this record we now know that Boris was the son of Morris and Rose Cohen and was the husband of Tamara Lewerton. All of this information is wonderful for those looking for more information on their ancestor.

As with all FamilySearch records, this can be searched for free from any computer.