Probably the first Jews to arrive in Trinidad and Tobago came in the later part of the 1700's. This first group was not large by any means but put down a good foundation within the country. The first major group of arrivals came in the late 1800's. 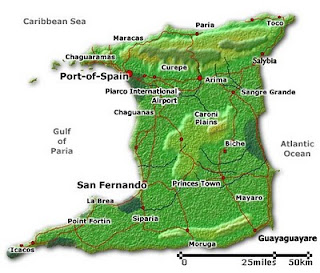 These Jews were made up of groups arriving from Portugal as well as from the neighboring islands of the Caribbean, such as Curacao and St. Thomas.
A good example of one of the families from another island, would be the family of Isaac and Rachel Cohen D'Azevado. They were the parents of seven children, 6 daughters and 1 son. The first four children were born on the island of St. Thomas, and the last three were born in Port-Of-Spain, Trinidad.
The largest wave of immigrants came in the late 1930's, fleeing Nazi Germany. Towards the end of the decade the Jewish population had grown to about 650-700 people. Unfortunately, after the outbreak of war, many countries put restrictions about those people who had fled Germany. Many were put in internment camps and all saw there quality of life reduced. This caused many to leave the island, and eventually the Jewish population faded to but a few. Today, the population numbers but a few dozen.
The records of some of those Jews from Trinidad can be found in the records of the Jews of St. Thomas and are now being added to the Knowles Collection-Jews of the Caribbean database.

Email ThisBlogThis!Share to TwitterShare to FacebookShare to Pinterest
Labels: History, Trinidad and Tobago