While today the Jewish community of Haiti is not large, the island has a very complex history of the Jewish people. It is believed that the first Jew to arrive in Haiti was Luis de Torres, who was travelling as an interpreter for Christopher Columbus, however the first true community was established by Dutch Jews in the early 1630's.
When the French colonized Haiti in 1633 these Dutch Jews immigrated from Brazil to work on the sugar plantations. Only 50 years later the Jews were expelled from all French Colonies, including Haiti, when the French passed the Code Noir (Black Code), which forbade the practice of any religion other than Roman Catholic. Some Jews however were able to stay in Haiti under special residence permits. The Jews who stayed were broken into two groups, Portuguese Jews from Bordeaux and Bayone, and the Jews of Curacao.  These two groups of Jews settled apart from each other, with the Portuguese Jews settling in the Southern part of the country, and the Jews from Curacao the Northern part. 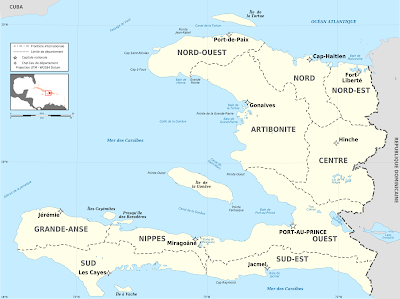 Haiti was much like the rest of the Caribbean countries where there was a lot of movement of the Jews between the islands. This was because of many different reasons, but included, fleeing restrictions on religion, the Islands falling under the control of unfriendly countries and the destruction caused by storms and weather.
A great example of the movement of Jews around the Caribbean is the Moise family. Abraham Moise Sr. was born in Alsace in 1736. As a young man he left home and after a voyage over the ocean arrived on the island of San Domingo. There he made his home and established himself as a businessman. Around 1779, he traveled to the French Colony of St. Eustatia, an important center for the shipping trade. It was there that he met Sarah, who would become his wife.
Abraham and Sarah had 9 children, 7 sons and 2 daughters. Of these children the first 3 were born on the island of San Domingo. It was the 4th child, Hyam who was born in Port Au Prince, Haiti on 18 Mar 1785.
In the early 1790's there was an uprising against landowners on San Domingo, which forced the Moise family to flee with little more than the clothes on their backs. The family then made passage off of the island and made their way to Charleston, South Carolina. In Charleston, the family prospered, not only in business but also in service to their new country. The family tree is full of family who served during the Civil War, and at least one early member who served in the Revolutionary War.
In later years, the country of Haiti, came to the rescue of many families during the Holocaust. In 1937, Haiti issued visas to Jewish families trying to escape the Nazis. Today, the Jewish community numbers under 100, however their influence on the Caribbean and United States Jewish communitys is incredible, proof that very few people can make a difference, a valuable lesson for all.