The Jews of Bermuda

Much has been written in this blog about the Jewish communities of the Caribbean. The islands have a great history for the Jewish people. One location, however that does not share in that same history is the Island of Bermuda. We do believe that Jews were there as early as the early 1600's, because of Jews Bay. Tradition has it that the bay was named after a group of Jews who had their business's on the island.
The main reason for a lack of Jewish history on the Island of Bermuda is the attitude of the British toward Jews in the 1700's. The British ruled the island at that time and their attitude led to laws and policies which made life hard for the Jewish community. The most severe law was passed in 1694 and was called "An Act Laying an
Imposition on all Jews, and reputed 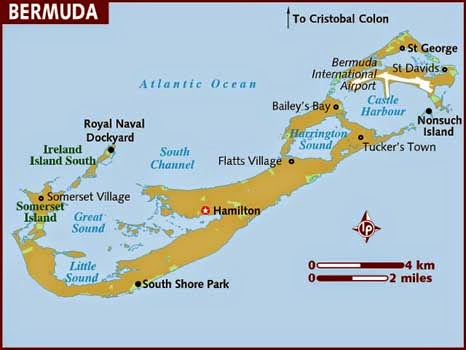 Jews, Trading or merchandising on These Islands". This law levied a five pound tax on any Jew attempting to do business on the Island of Bermuda. The reason for this law was an opinion that the Jews were doing business and making money yet sending that money out of Bermuda to foreign lands. That law was not revoked until 1760, when it was finally realized that Jews were taking their trade elsewhere and it was hurting Bermuda.
It wasn't until after the World War II that Jews started coming to Bermuda. However these Jews found that the island was not friendly toward them and were still putting restrictions upon them. This led to most Jews avoiding Bermuda completely. In fact the majority of the Jewish community of the second half of the 20th century was made up mostly of military personnel serving on the United States Naval Base. That base closed in 1994, which caused most to leave the island. The community is now almost completely residents of Bermuda. Today the Jewish population is only about 100 people.
Posted by W. Todd Knowles at 4:16 PM