The Jews of Mozambique

On 16 November 1910, the Ship Garth Castle landed at Southampton, England. The ship had departed out of the Port of Delagoa Bay, Mozambique. On board that ship was Minnie Buirski, a Jewish mother traveling with her 8 children, and most likely very pregnant as her ninth child, a daughter named Beryl had arrived in time to be listed as a 2 month old on the 1911 Census of England. According to that census, mom was born in England, the eight children who sailed with her were all born in South Africa and Beryl brought the family full circle as she was also born in England.
The fact that a Jewish mother with such strong ties to South Africa and England would wind up sailing out of Mozambique may seem surprising to some, but 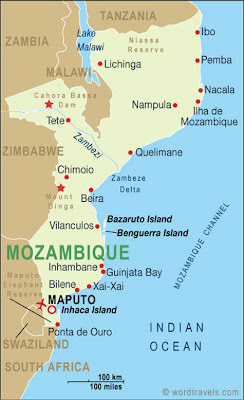 the country of Mozambique and its small Jewish community has been tied to both countries. The congregation in Mozambique actually was founded in 1899 when Joseph Herman Hertz arrived from Johannesburg. He convinced the Jews of Lourenco Marques to organize a community and to begin acquiring land for a synagogue and a cemetery.
The original Jews who settled in Mozambique were a very diverse mix. Equal parts Ashkenazic and Sephardic, they arrived from places such as Vilna, London, and South Africa.
In 1926 The Sephardic Jews  and Ashkenazic Jews came together and built a synagogue that they shared. However, the fact that even combined as one the community was just not large enough to support having their own Rabbi. During the time of World War II, a large number of Jews arrived from Nazi occupied European countries.
Even with these Jews arriving, the community never really grew and by the time of the Mozambique Independence in 1975, most of the Jews had left the country. In the late 1980's a move was started to bring the synagogue back to the Jewish community. Since the recovery of that synagogue, the community has begun to grow. Although still small, the y have begun to reclaim the cemetery and they have reestablished the Jewish traditions to their younger members.
Posted by W. Todd Knowles at 9:47 AM