The Jewish history of Denmark is almost 400 years old. In 1622, Denmark became the first of the Scandinavian countries to allow the Jews to settle on a permanent basis. King Christain IV, invited the Sephardic communities of Amsterdam and Hamburg to establish communities in the city of Gluckstadt. Those who accepted this invitation were for the most part traders, financiers and jewelers.

There were some Jewish communities that existed from the beginning of the seventeenth century in other areas under Danish rule, but this was the beginning of Jewish life in Denmark. The Jewish population of Denmark slowly grew over time. By the end of the 1700's there were close to 2000 Jews in Denmark, which about 75% of those in the city of Copenhagen.
In 1814, the Jews were granted civic equality and in 1849 they received full rights of citizenship. These two events led to more and more Jews wanting to live in  Denmark. The numbers reached about 3,500 Jews by the mid 1800's and about 6,000 by the early part of the 1900's. Until the end of the 1700's hundreds the Jewish community was strictly orthodox, then in the early 1800's Reform Judaism was introduced.
In the collection of the Family History Library are the records of the Mosaic Congregation of Copenhagen (Film numbers 44,590-44,595). These records cover the time from 1693-1953. Included are the births, marriages and deaths. Below is the 12 August 1813 marriage of Aron Philip to Hanne Moses Cantor.

These records were microfilmed in 1950, so the quality is not the highest of quality. However, many of these records have now been indexed at www.familysearch.org. They are included as part of the Denmark, Marriages, 1635-1916 database. 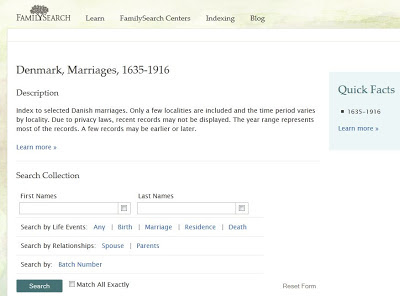 When that same marriage is search for here, the following is the result. 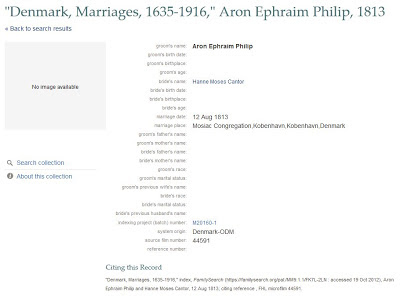 The images are not included at this time, however the names and dates are given , as well as the Family History Film number. To access this collection at FamilySearch, just follow the link below.


As always, Family Search is a free database that can be searched from your home.