The Jews of Monaco 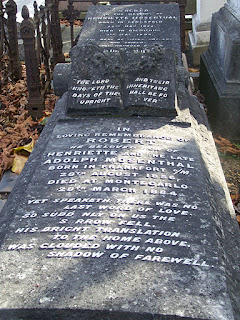 I have just returned from London, where I was able to revisit the Willesden Jewish Cemetery. While there, I was able to view the headstones of a prominent family with ties in many parts of the world, the Mosenthals. Adolph Mosenthal was born in Germany in 1812, his wife Henrietta was born in 1822, also in Germany. Together they left Germany and in the late 1840's arrived in South Africa. Once in South Africa he established a family business, that became one of the largest players in the trading of diamonds. In a later post I will talk a lot more of this family. It is what was listed on the headstone of Robert Mosenthal that drew my attention to this post.

On his headstone (at right) it states that he died on 28 Mar 1884 in Monte Carlo. His death, like some other British Jews, being given as taking place in Monaco, brings up interest as to the Jewish community located there.
Prior to World War II there were a few Jews who lived in Monaco, maybe only 250-300. They were for the most part Ashkenazic Jews from France. During the war as the Jews faced persecution from the Nazi's, the government stepped in and issued false identification papers to Jewish residents to protect them from being sent to the camps. The police, however did arrest some and and turned them over to the Nazis. In a great show of support, Prince Louis II refused to dismiss any Jewish government workers and protected people such as Edouard de

Rothschild from being handed over to the Nazi's for almost certain transportation to the camps.
The current Jewish community was officially organized in 1848. Most of the Jews in Monaco are not official citizens but residents who are mostly from France and the United Kingdom. There are also a few Jews from France and North Africa.
The entire Jewish population, both citizens and non-citizens number about 1000, located mostly in Monte Carlo. This would mean that the community makes up about 3% of the entire population, which would mean that only Israel has a higher per capita total of Jewish residents in the entire world.
Posted by W. Todd Knowles at 6:55 AM