The Jews of Mali

The Jewish history of Mali may go back as far as biblical times when the Egyptian Jews settled in in the northern part of the country. We know, however that in the eight century a group of traders who travelled the world, known as the Rhadamites, settled in Timbuktu and the area that surrounds it.
History tells us that the next large wave of immigrants came in the late 1300's when Jews fleeing persecution in Spain 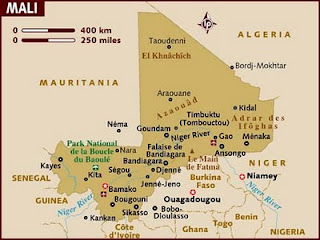 found their way to the area of Timbuktu. These Jews settled three settlements that still exist today, Kirshamba, Haybomo and Kongougara.
Even later, in the 1492, King Askia Muhammed came to power in Timbuktu. He ordered that all Jews convert to Islam or face execution. Because of this the Jews became scattered, some fled, some converted and some chose to stay in Mali. Those who stayed faced generation after generation of persecution. As the persecution continued, the community went away leaving no Jews by the 1900's.
The lack of a community existed until the most modern time, in the 1990's when the past Jewish heritage became more well known. That heritage was documented by historian Ismail Diadie Haidara, who has now formed a group known as Zakhor. Zakhor hopes are to reestablish the Jewish community, through such things as learning Hebrew, collecting the histories and preserving the cemeteries of their ancestors.
To learn more about our heritage is a worthy goal for all and best of success to them.
Posted by W. Todd Knowles at 3:14 PM

Email ThisBlogThis!Share to TwitterShare to FacebookShare to Pinterest
Labels: Mali