Martinique is a small island located just north of the country of Trinidad and Tobaggo on the eastern edge of the Caribbean Sea. The history of the Jewish community there can be traced back to the early 1600's. Like many countries of the Caribbean, Martinique was first settled by Jews from Amsterdam who had arrived in that country as settlers fleeing the Inquisition of Spain and Portugal. 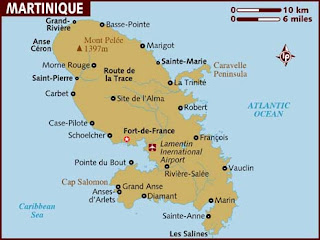 Most of these settlers who arrived in Martinique were merchants and traders, working for and protecting the interests of the Dutch. Most of the early Jews lived in the larger cities, the business centers. This allowed many of them to become very prosperous and successful.
In 1635, Martinique was conquered by France. For many years this was not a problem for the Jews, they continued to prosper and the community grew. In 1667 the first synagogue was founded in Martinique. Over time however, the French began to grow jealous of the success of the Jews and discrimination against them grew.
Finally, in 1683, bowing to pressure from the French merchants and the Jesuits, King Louis XIV expelled the Jews from Martinique. This led to a group of Jews leaving for Curacao. However a good number of the Jews in Martinique simply ignored the law and stayed. This group of Jews continued to flourish and the community actually grew. The laws against the Jews were finally withdrawn after the French Revolution.
Today, the majority of the Jewish population in Martinique resides in the community of Schoelcher where they have built a synagogue. There is also a smaller group located in Fort-de-France comprised mostly of the Jews who arrived from France and North Africa in the latter part of the 1900's.
Posted by W. Todd Knowles at 4:38 PM