The history of the Jewish people in Scotland may date back to  the late 1600's when there were records of Jews applying to take up residence in the country. However the first Jewish community in Scotland, located in Edinburgh, was officially established in 1816. There were Jews in Edinburgh before 1816,  but this was the date on which the community was established.
The time frame from the mid 1700's to the beginning of the following century was  a time of great growth within Scotland. This growth had a great impact upon the Jews of Scotland. In Glasgow,  the population went up over 400% during those fifty years, which led to the arrival of a large amount of Jews, who
began to arrive in about 1820.
The Jewish community in Glasgow continue to grow and by 1870 included over 1000 people.  This growth led the community to decide in 1875 to build a  synagogue. This would be the first permanent synagogue built in Scotland. At a special meeting in 1875 it was decided that the new synagogue would be built at the corner of Garnet Street and Hill Street and was called the Garnet Hill Synagogue. The foundation stone was laid by Benjamin Simon two years later. The new synagogue was consecrated  on the 9th of September in 1879 by Rabbi Hermann Adler. The Garnet Hill Synagogue was opened just as the Jews from Eastern Europe fleeing from poverty and constant persecution began to arrive.
As a result of the growth of the community, it became necessary to establish cemeteries for the burial of those who passed. The majority of the Jews were buried in one of three cemeteries. These cemeteries, Glenduffhill Jewish Cemetery, Riddrie Cemetery and Sandymount Cemetery, are the final resting place for some 10,000 members of the community. Over time the cemeteries have fallen into a state that now requires restoration. Under the direction of the Glasgow Hebrew Burial Society, restoration work has now begun. A wonderful article on the project can be found on the Jewish Heritage Europe website.
The Burial Society in Glasgow has always been very helpful to those looking for their families. The records they hold are now included in Glasgow Hebrew Burial Society Database, which is available through the JCR-UK website. As helpful as they have been it is now time for others to help them. Please take a moment and read the article and see how you can be of service to the Burial Society. A few years ago I visited Glasgow and enjoyed the beauty of the city, now hopefully we can help return the cemeteries to that same beauty.

In a past article in this blog, I have written about the Jewish community of  Kastoria in Greece. These people were famous for the work as furriers. In the last few months I have been researching some Jewish families of Greek heritage who settled in the Lower East Side of Manhattan, New York in the first part of the 20th century. 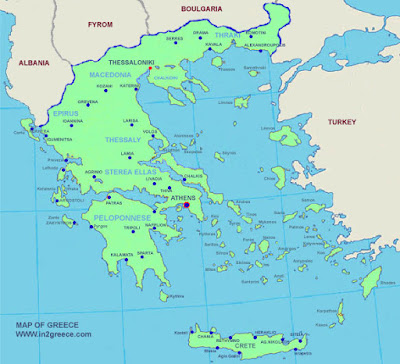 As I began to research these families something became very apparent to me. This group had a very strong connection one to another. This was much more than the connection we would have today with our neighbors, to them it seemed as if everyone was family. These were the Romaniote Jews of Ioannina, Greece, which is located in the Northwest part of Greece.
Romaniote Jews had lived in Greece and neighboring countries for over 2,000 years. Local tradition states that the first Jews into Ioannina arrived shortly after the destruction of the Second Temple in  70CE. These Jews were neither Ashkenazim or Sephardic but had their own traditions.
As I began the search, I quickly discovered that most of the families who left Ioannina, did so because they were looking for a new life in America. A large amount of the families had someone who left between 1904 and 1920 headed for New York City.
This people didn't just come one at a time, they came in groups, maybe to have the security of having friends and families around them. The passenger list below is just one example of that bond. This is page 1 of the manifest fro the S.S. Argentina which sailed out of Patras, Greece in November of 1912. 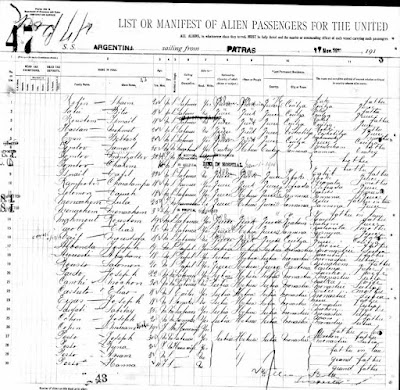 Of the families listed on this manifest, almost 2/3 identify themselves as being Greek Jews, and on the far right of the page most list the relative being left in the old country as being some on in Janina, Greece. Page 2 of this manifest continues to show how the community was staying together. 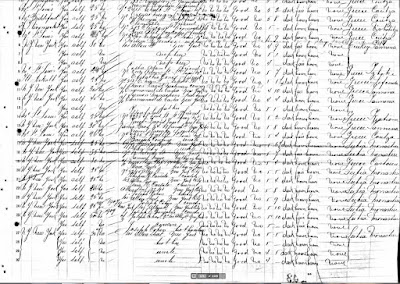 In the fourth column the passenger list the name and address of the person they will be living with upon arrival. As with many of the people on this page, thousands of the Jews form Greece and Turkey listed the final destination as the area around Allen Street, Manhattan. During the time frame of 1904-1920 there are thousands who list Allen Street, Broome Street, or Eldridge Street as their future home. One page from the 1920 United States Census for Allen Street reinforces this. On the page below, more than half of the families list themselves as either being from Greece or Turkey. 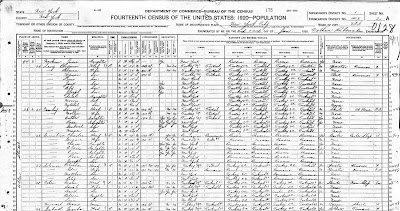 The page above is just the end of house number 94 and the first part of house number 96. There were many apartments in this area and because of that the residents of Allen Street alone fill hundreds of pages.
Upon arrival and after becoming established in their new neighborhood, many settled down and started families with those they know so well, people from Janina. The document below is the Naturalization Record of Esther Solomon. 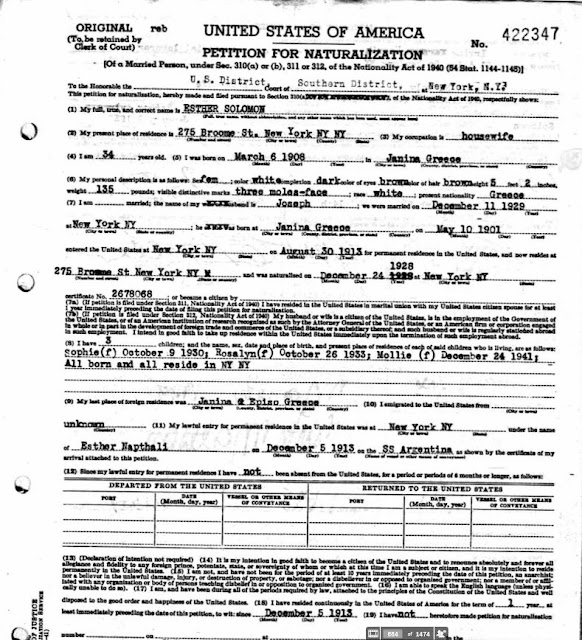 By 1926, the community had grown enough that construction was begun on a new synagogue. Completed in 1927, Kehila Kedosha Janina Synagogue was built at 280 Broome Street just steps from the home of Joseph and Esther Solomon, who are shown in the document above. This is the only Romaniote Synagogue in the Western Hemisphere.
The fact that they were separate from other Jews, with their own traditions probably had a lot to do with the strength of their commitment to each other. Another group of these Jews also existed in Seattle, Washington, where they also maintained a tight bond.