In May of 2011 I posted a piece on this blog about the Slovakia Church and Synagogue Books being added to the Historical Collections section of www.FamilySearch.org. That post can be found at http://knowlescollection.blogspot.com/search/label/Slovakia .
Today, I can report that the records in that collection have been further updated to now include over 1,000,000 records, of which over 15,000 are digital images. For those with Slovakian ancestry, this is a great addition to FamilySearch. For more information on how to use the collection, visit the earlier post.
Posted by W. Todd Knowles at 1:23 PM 3 comments:

Recently, I had the opportunity to attend the International Association of Jewish Genealogical Societies (IAJGS) annual conference held in Paris, France. It was a great way chance to renew friendships and learn from the experts of Jewish genealogy.
I was able to present a lecture on The Jews of The Caribbean, a topic that has been discussed here on this blog many times. A major part of the presentation was discussing the records of St. Thomas, which for many Caribbean Jews was a very stable home. I discussed the influence that these great families had upon the rest of the world, not only in America but the entire world. There was no better example of this influence than my visit to Père Lachaise Cemetery before the conference. 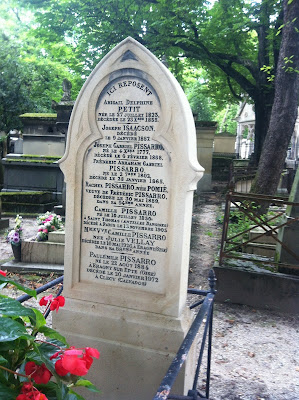 Père Lachaise Cemetery is one of the world's most famous cemeteries, the final resting spot of so many influential people. Knowing that I wanted to visit this beautiful place I took an evening and ventured into the subway for my trip. It wasn't very long after arriving that I came upon a Jewish section of the cemetery. There, I found the headstone (at right) of Camille Pissarro and many of his family members.

Camille Pissarro, was born on 10 July 1830 on the island of St. Thomas, he being the son of Fredrick Abraham Gabriel Pissarro, a merchant in Charlotte Amalie. His father was a Sephardic Jew.
At the age of 12, his parents sent him to a boarding school in Paris, where is interest and talent for drawing was noticed. Upon returning to St. Thomas, however, he found that his parents did not share in the idea of him become a painter. Finally, with a desire to have the freedom to paint to ran off to Venezuela with a painter he had met by the docks. He now had the freedom to pursue his dream.
Pissarro, did return to Paris and painted. His influence, like the Jews of St. Thomas is incredible. While his early paintings fit into the styles of the time, it was not the kind of paintings he loved. He soon began to venture into the French countryside to paint the scenes he saw there. He truly was documenting the life of  the everyday villager. His worked was not well received, in fact most of his work was rejected by the art world.
In 1859, he was attending school, when he became friends with some fellow painters who shared his love of painting in a realistic fashion. Those painters were Claude Monet, Armand Guillaumin and Paul Cézanne. With these men he became one of the greatest Impressionist painters ever, in fact many have called him the father of that style. His works have shown all over the world, and the influence of him was felt in every type of painting. His life is one very much worth studying. 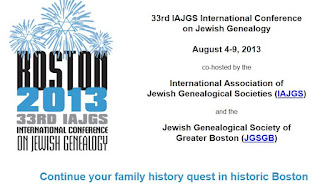 After a very successful 2012 IAJGS conference held in Paris, it is time to turn our thought ahead a year and begin preparing for the 2013 conference, which will be held in Boston. More information can be found at the conferences website http://iajgs.org/2013.html 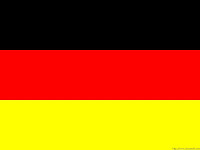 As the number of collection available at the Historical Records Collections of www.familysearch.org continues to grow, it's easy to overlook some of the smaller databases. Some of these are very important for those looking for their Jewish ancestors.
One such collection are the census records for Germany, Mecklenburg - Schwerin. Familysearch now has availble parts of three censuses, 1867, 1890 and 1900. 1890 and 1900 are searchable by name at this point, however 1867 is not.
The 1900 census has over 760,000 images as of this time. The collection comes with a description of the record (shown below) that helps explain the record set. 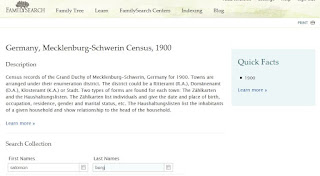 In this case I did a search for Salomon Berg, who I knew should be included. Indeed he was, and the image below shows the summary of his entry. 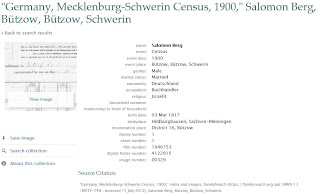 Included with the record above is the original image the information was taken from. By clicking on the view image tab at the left of the image, the original record becomes available. The original census form for Salomon Berg is shown below. 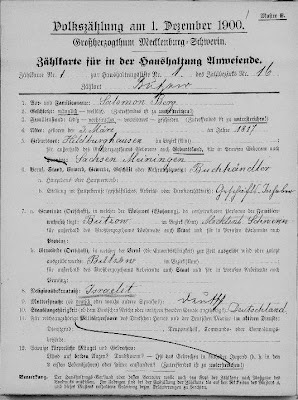 The collections are constantly being updated and it is very worthwhile to continue checking back for new available records.